The Interop Engine is an automated test tool designed to streamline interoperability testing with Actility ThingPark LoRaWAN® network server implementation, which is used in many public networks and in private networks using ThingPark.
The tool implements a list of tests applicable to specific LoRaWAN® specification levels (1.0, 1.0.1 or 1.0.2), device class (A, B or C) and regional profile.

Because the ThingPark Interop Test tool does not require a specific test mode, it is dependent on the device sending uplinks for many tests. Therefore most tests run unattended in the background, capturing uplinks as they are transmitted by the device. Of course, if you are able to accelerate the rhythm of uplinks, e.g. by configuring a thermometer to report temperature every 5 mns or by shaking a tracker in motion triggered mode, you can do it and it will shorten the duration of a test campaign. However, even if you take specific actions to accelerate the campaign, it is the operational firmware of the device that will be in control of the LoRaWAN® stack, not a specific test mode application.
The car industry has demonstrated that test mode and normal operation can diverge in meaningful ways !

Set up your device

To run an interoperability test campaign with your devices, it must be already be provisioned on the ThingPark Admin Console and configured to be associated to a specific application named “interop”.

Once logged in, select the Interop menu in order to display the current list of test campaigns with their status.

In case you have no campaign created yet, the page is empty. It’s time to go to the next step to create your first campaign!

Some tests are added by default upon test campaign creation and immediately start to run in the background. These tests do not change any configuration on the device and as such are non-intrusive.

Most device developers will typically use the interop tool initially as part of the device development cycle. In such phase, developers will need to run test cases one by one, and adjust device configuration or firmware to pass them. That’s what developper campaign allows and that’s the first type of campaign you should create.

Once your device firmware and configuration is mature, you’re ready to go to the next stage and run a test campaign using the exam mode. In this mode, the test campaign us launched globally, and all test cases are run at once ; this mode is required to achieve the ThingPark Connected certification.

From the Interop page, you can visualize the details of a test campaign by opening it. More specifically, you’ll see the current status of the campaign, the list of test cases and their status, as well as detailed information about a specific test case.

To launch a specific test case that is currently not part of your campaign – Status to “None”- select the test and click on the “+” button.

To know more about test campaign management with ThingPark Interop Engine, have a look to this page.

To get your device ThingPark Connected, one option is to carry out a test campaign using the ThingPark Interop Engine Exam Mode. The device will achieve the certification if the campaign is successful.

To do so, create a new test campaign, but selecting the exam mode instead of the developper mode. 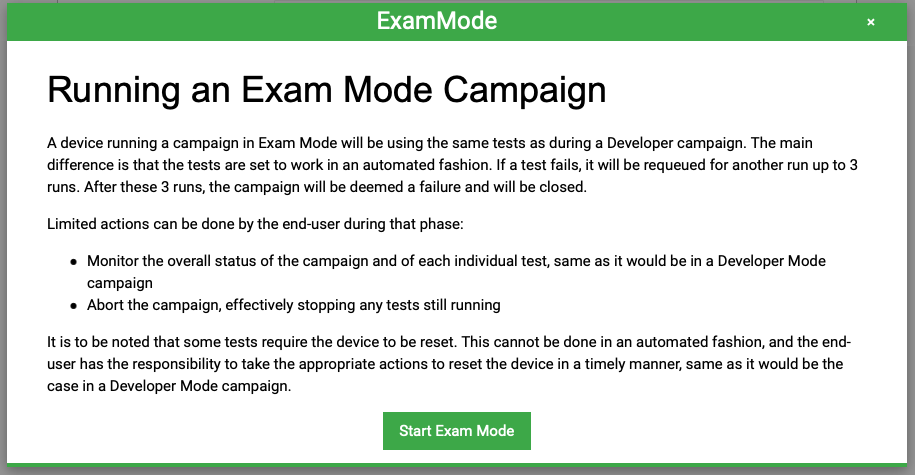 To associate a device to a campaign, it must not be associated another active campaign.

By default, all test cases are part of the campaign. Browsing the test cases list, you’ll be able to monitor test status and progress as per the developer mode.

You’ve completed the integration of your device with ThingPark ? Let’s get in touch to review it and confirm that you’re device is now ThingPark Connected!

Complete the form below and our team will get back to you shortly.